Font Sunday: The Macabre – Typelark is guest host for Hallowe’en

This Sunday I was lucky enough to host The Design Museum’s weekly typographical Twitter get together #FontSunday for a second time. Every Sunday at noon, #FontSunday is a weekly gathering of type nerds on Twitter who post typographical images relating to the theme that week. I love taking part every week, so it was great to host the latest one to celebrate Hallowe’en again, with the topic #macabre.

It was brilliant fun, and submissions included graphics from book covers, packaging, signage, posters, film titles, all relating to the macabre in some way, with some classic horror typography and some new and surprising. As you’ll see from my post about my last #FontSunday hosting, there was an array of different spooky type treatments, ranging from the very subtle to the overt ‘horror’ style of shivery, scratchy letterforms. And again, stylistic variations garnered from type in motion, still type, time period, country of origin and so on.

I thought I’d share some of my favourites with you here, of course there were a lot of wonderful submissions, so it was difficult to choose just a few. I’ve also included links to the contributors’ Twitter accounts. 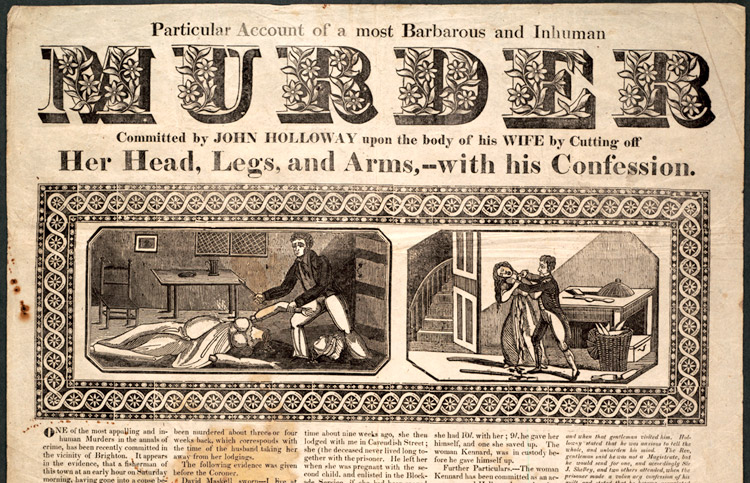 Murder Broadside, 19th Century
Zoë Chan: @ZoeTypelark
Another one of my loves, the old broadside. For the headline ‘murder’ here, I love the juxtaposition of the delicately ornate lettering vs what it is saying. Very macabre indeed! 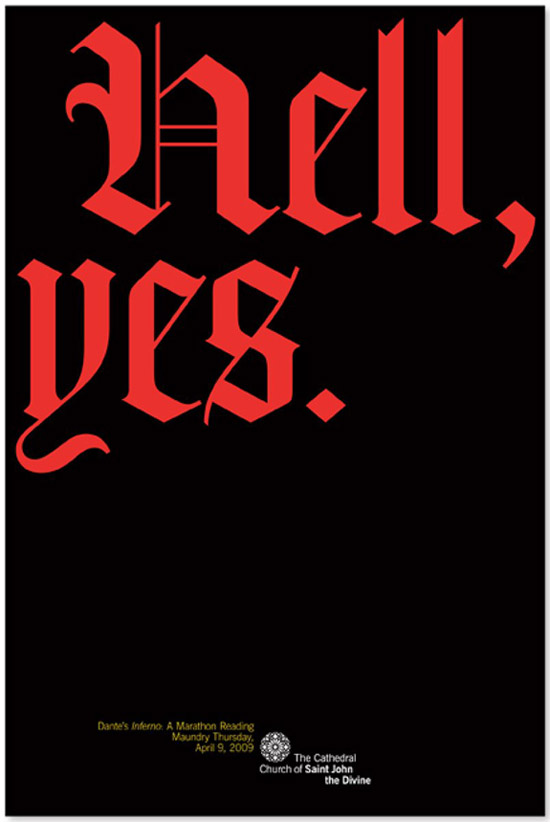 Poster for Dante’s Inferno reading, by Michael Bierut via @pentagram

Poster for Dante’s Inferno reading, by Michael Bierut
Pentagram Design: @pentagram
A perfect example of less is more: this is simple and bold, and lets the type do the talking. The use of red on black Blackletter speaks volumes, emphasising the text content whilst being ornate and visually impactful. And a great coming together of modern language use with the text it’s representing. 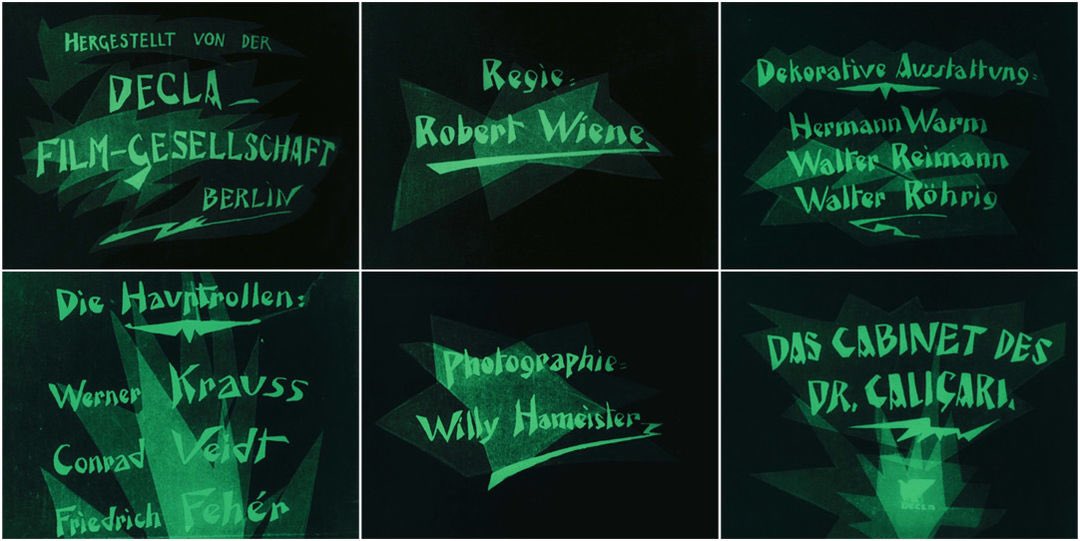 Das Cabinet des Dr. Caligari film titles, 1920
Richard C Evans: @Evansrc
I adore this film, and these titles are perfectly evocative of it. The green glowing lettering is very manic, pointy, angular and dark alluding to the mind of the hypnotist Caligari getting Cesare the somnambulist to do his murdering dirty work. 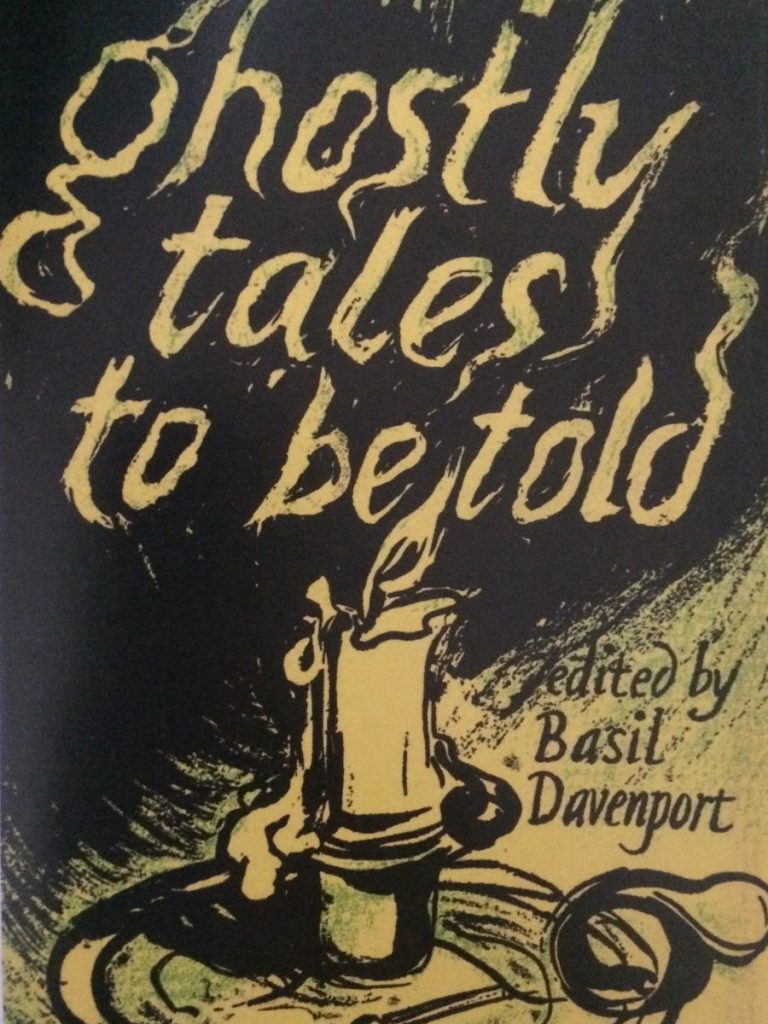 Ghostly Tales to Be Told edited by Basil Davenport, 1952 Faber & Faber via @AnnieBlinkhorn

Ghostly Tales to Be Told, edited by Basil Davenport, 1952 Faber & Faber
Annie Blinkhorn: @AnnieBlinkhorn
Faber & Faber have always designed beautiful covers, and are particularly strong with typography. I love the simplicity of concept, colour use and hand lettering here. I love that the tapering wispiness of some of the letters echoe the candle flame, it gives it a particularly eerie feel. Very atmospheric… 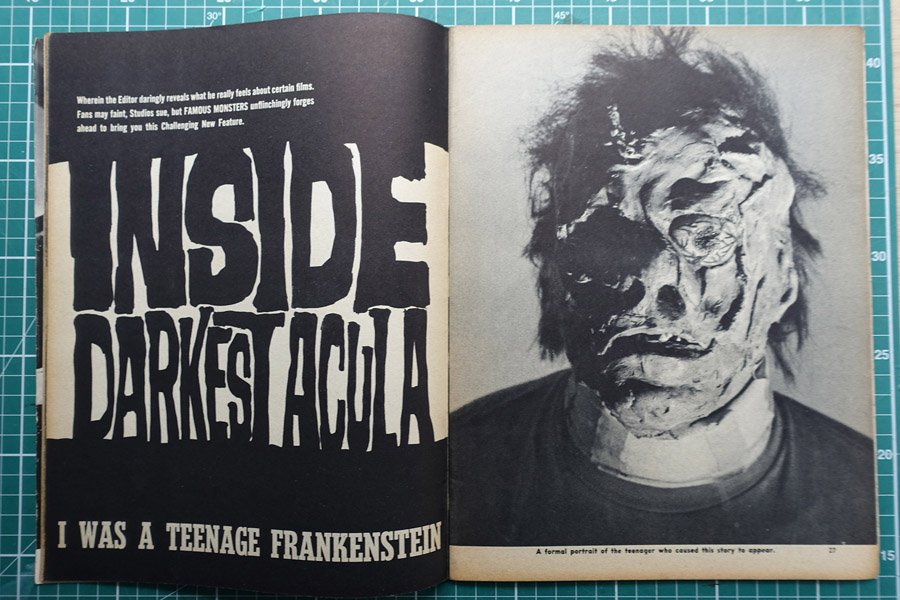 Spread from Famous Monsters of Filmland magazine via @JakeTilson

Spread from Famous Monsters of Filmland magazine
Jake Tilson: @JakeTilson
Simple black and white, bold and overbearing, I particularly like that this takes over the page, and is quite claustrophobic. I think the lettering also betrays the era in which it was designed (the publication ran from 1958 onwards) and in my mind, is quite camp! 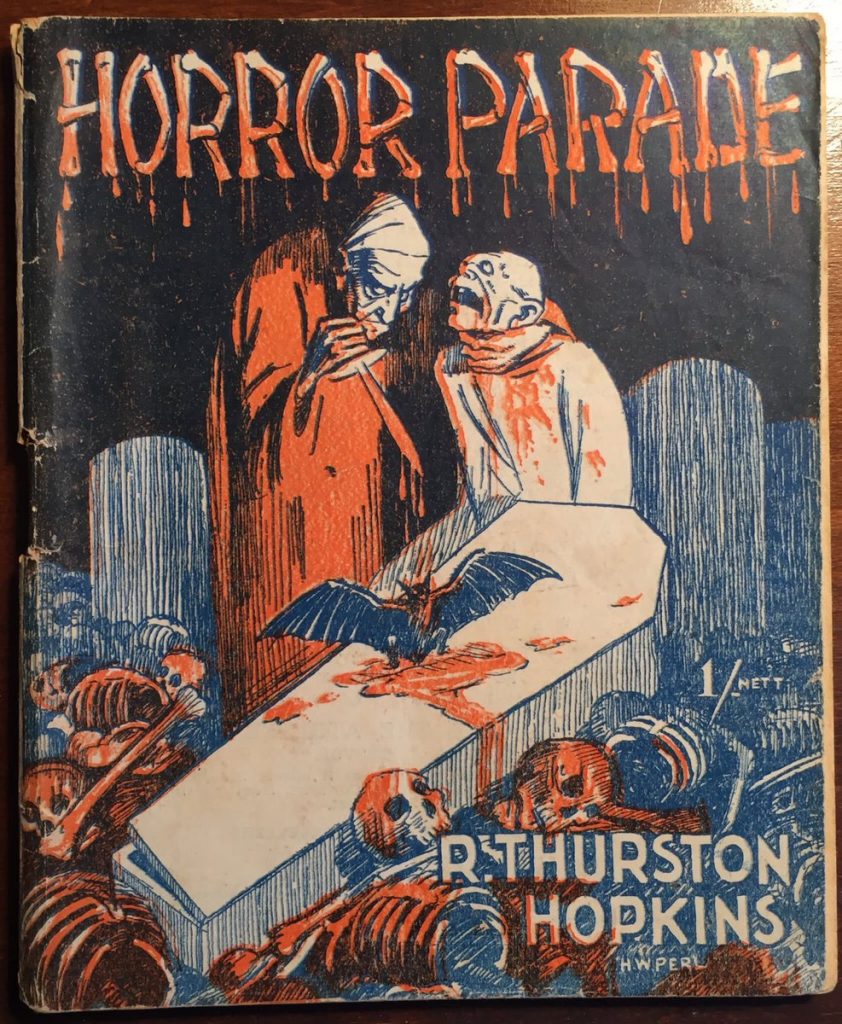 Horror Parade by R Thurston Hopkins, 1945
Jim Stokes: @JAStokesNJ
Nice horror cover. I love the bone lettering dripping blood, and especially the colours which look printed off registration which I think is deliberate, this really adds to the jarring of the overall design. Simple and old school. 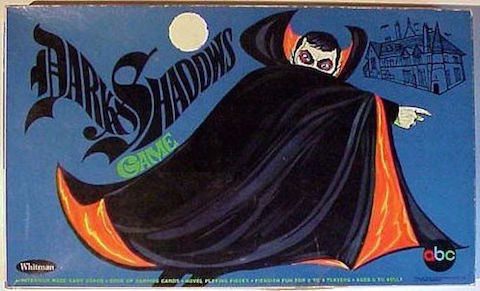 Dark Shadows board game box, 1969
Marie Dulin: @MurrMarie
Brilliant, fun and effective lettering in the shape of a vampire bat! Simple as that. Using some blackletter, which always has a dark gothic feel, combined with other lettering showing the era in which it was designed. 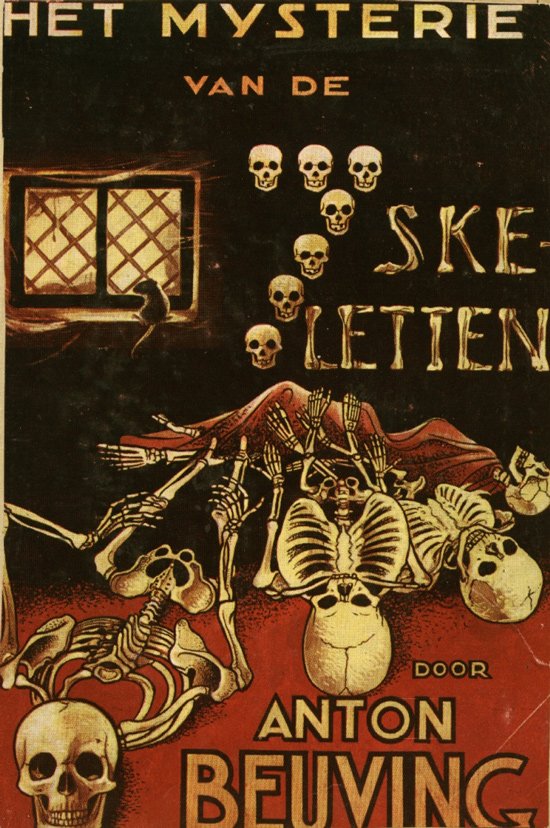 Het Mysterie van de Zeven Skeletten by Anton Beuving, 1953
NPM: @NeoPteridoMania
I love, love, love this! It just completely pleases me – it’s all beautiful from the illustration and colouring to the lettering, I love the combination of modern type, the bone-like letters and that the number 7 is made up of skulls! I’d love my own copy of this one… 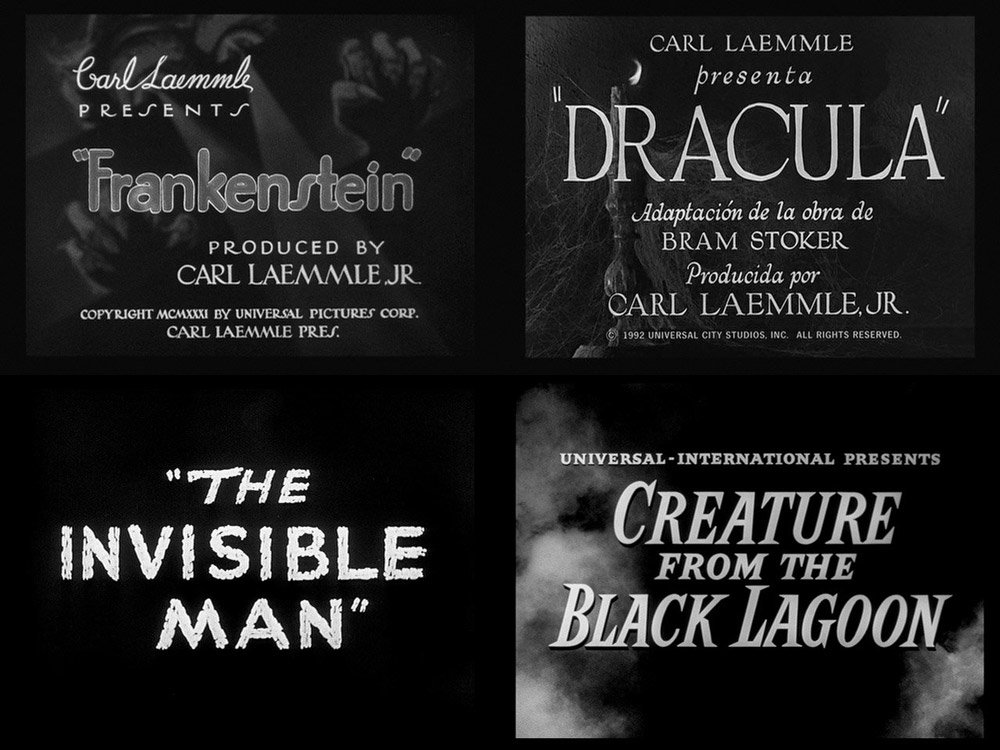 Various Classic Horror Film Titles
Philip Kennedy: @philipkennedy
Yes, I’m addicted to film titles. I like how these ones, all from the early 1930s except Creature From the Black Lagoon, are mostly elegant rather than outright fiendish; this places the stories and characters on a completely different plane. Most likely just a reflection of design at the time, rather than any deliberate stylistic choice. 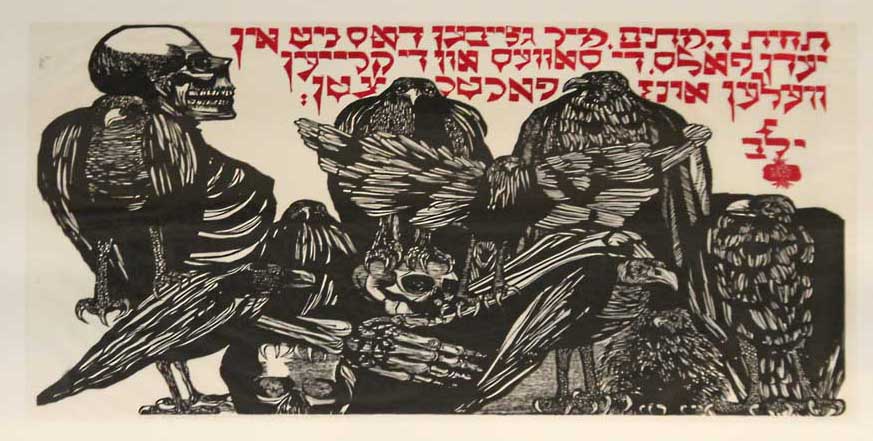 By Leonard Baskin via @Patrick_Myles

By Leonard Baskin
Patrick Myles: @Patrick_Myles
I chose this because it’s refreshing to see how something macabre is represented in another language – in this case Yiddish. I am no expert in these characters, but I think they are quite spiky here, and coupled with the red, is very unsettling indeed. It says: ‘Resurrection of the Dead: we don’t believe in it and in any case, the owls and crows will replace us.’ – translation thanks to Rokhl (@RokhlK).

You can see many of the submissions together here at the Design Museum’s Font Sunday Pinterest page. Or you can if you’re quick go to the hashtag #FontSunday on Twitter for 30 October 2016 so you can see them all (before they disappear into the Twitter ether!).

Thanks so much to everyone that took part – let me know what your favourite image is too, you can leave a comment below. Or if you come up with some great macabre horror typographics you’d like to share with me, just Tweet them to me at @ZoeTypelark!