Wow, it’s already 6 months since I guest hosted the Design Museum’s weekly typographical Twitter jamboree #FontSunday. If you’ve never come across #FontSunday before, every Sunday from 12 noon, type geeks gather on Twitter to share typographical images based on the theme of that week. As a regular contributor myself, I was very excited and honoured to be hosting it and with one of my favourite topics – horror – back on 25 October 2015, the weekend before Hallowe’en. So I thought I’d share it with you now, on its half year birthday, as this blog wasn’t yet born in its Typelark format then, and also because horror is for life, not just for Hallowe’en!

I wanted to see everyone’s favourite horror typography; this could be from film titles, book covers, posters, signage, packaging, all with a spooky twist. What I found interesting was the range of type treatment – from overtly ‘horror’ styles such as  ‘shivery’ or ‘scratchy’ letterforms, to very subtle horror twist type treatment of more conventional typefaces. And not to mention the stylistic variations of the time period, or the effects of type in motion.

This post will be much more of a visual one; here are just a few of the many, many contributions, which I’ve chosen as they highlight many of the aforementioned different approaches, and I’ve included links to the contributors’ Twitter accounts. 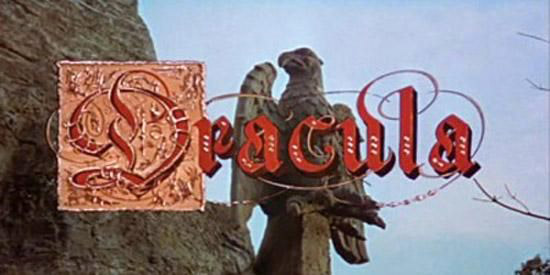 Dracula film titles (UK release), 1958
Zoë Chan: @uberbabygraphic
Blackletter is used for Dracula here for its sophisticated gothic-oozing quality. This 1958 UK version also adds a beautiful decorated ‘D’ which other releases do not use (as far as I have been able to establish). Stunning. 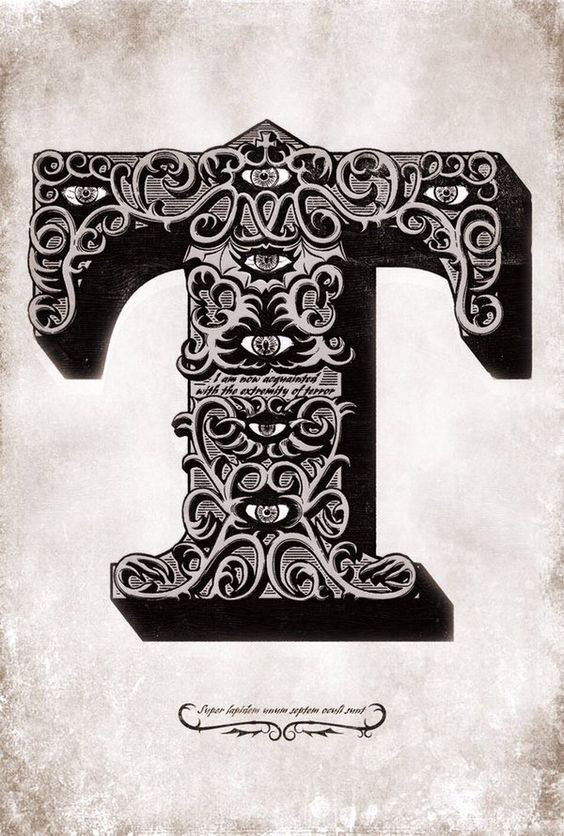 Spooky Lettering designed by Type Worship
Type Worship: @typeworship
I love this beautiful decorated lettering by Type Worship, it’s very gothic; it looks heavy, all consuming and somewhat suffocating, and I particularly like the eyes keeping track on you. 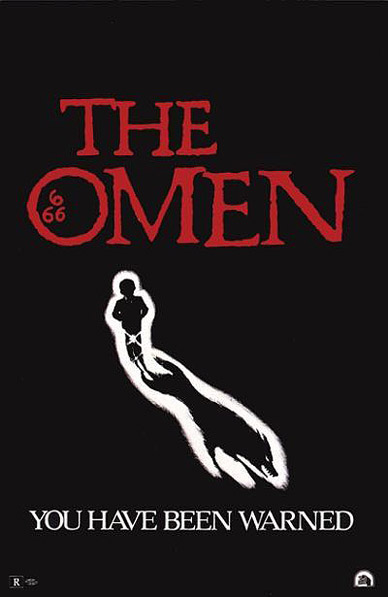 The Omen, 1976
Anne-Louise Quinton: @AnneQuinton
A simple yet effective type treatment here for The Omen. A red serif typeface with old qualities alluding to the historical significance of the Antichrist, letters jauntily placed to give a sense of unease, finished off with a somewhat discreet trio of sixes within the ‘O’. 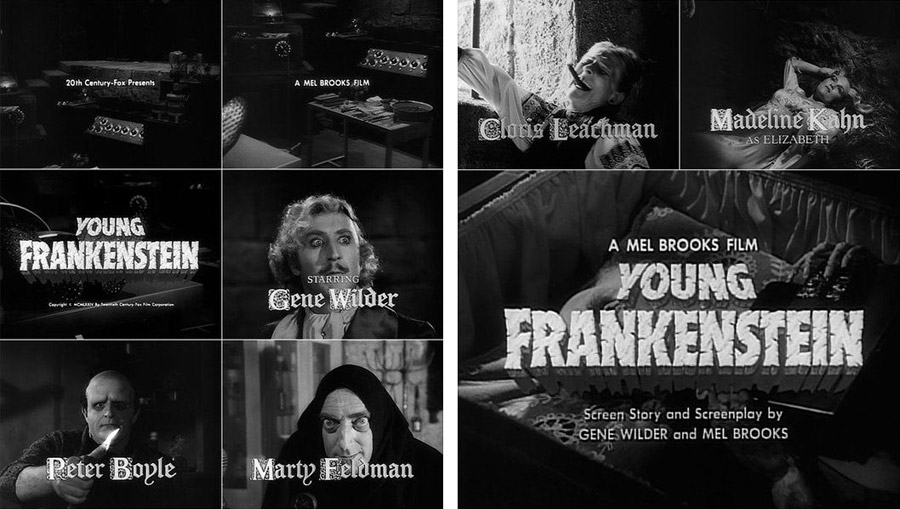 Young Frankenstein film titles, 1974
Amelie Exton: @ameliexton
This is brilliant – I love the way it uses two stereotypical horror style typefaces, blackletter, which is considered established and to a degree erudite, and a heavy-weight cracked style which tends to be more comical and camp. I think they are well reflective of the film itself. 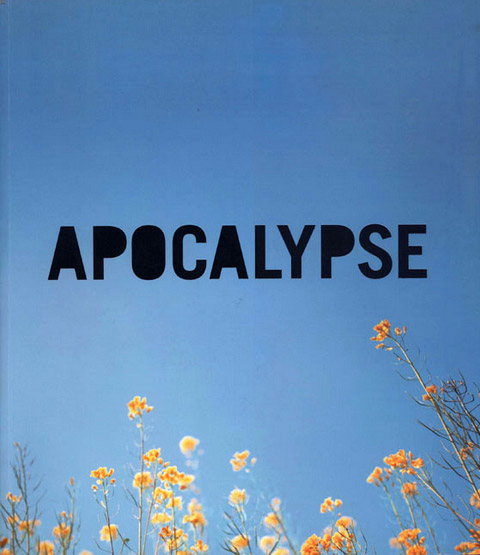 Apocalypse Royal Academy of Arts exhibition poster, 2000
Type Tasting: @TypeTasting
At first glance this seems to be a fairly quaint picture of perhaps Spring; blue sky, sun shining, flowers blooming. Then the heavy black type hits you with something very unnerving; what do the removed / blacked out counters mean? For me, this jumps out even before I’ve fully read and gathered the meaning of the word ‘Apocalypse’. A wonderfully effective juxtaposition of type and image.

Alien film titles, 1979
Studio Sparrowhill: @studio_sparrowh
The Alien title sequence is best viewed in its original motion form (you can see this here). In this case a simple sans serif has been used, nothing particularly horror-esque about it, except the way in which it has been rendered; the slow, symmetrical appearances of the letterforms brings a sense of the unknown and dread, and are stripped to their most basic streamlined form as an ideal of the futuristic and technological alluding to this sci-fi horror. I absolutely adore these titles, they do their job so spinetingling well. 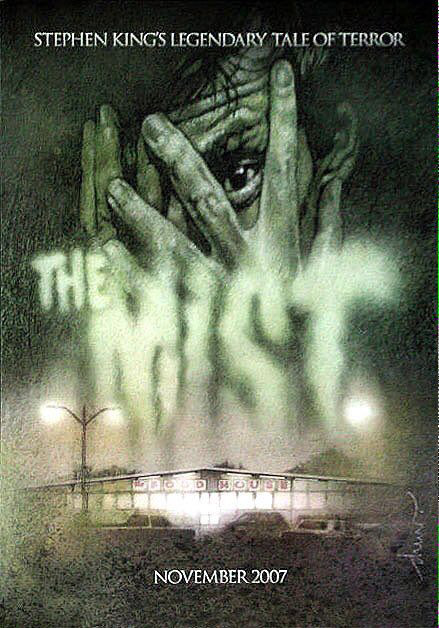 The Mist film poster, 2007
Daniel Benneworth-Gray: @gray
This poster for The Mist does what it says on the tin; a classic horror rendering, barely there green-tinged wisps blending into the background whilst simultaneously enveloping and swallowing up the rest of the graphics. 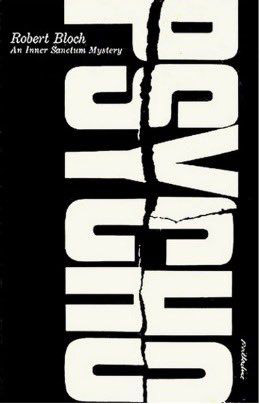 Psycho book cover, 1959
Richard C Evans: @Evansrc
A great example of subtle type treatment here for Psycho; a sans serif typeface has had just a simple touch added with the very jarring and disjointed ripped effect. So simple, yet it effectively screams what the book and film is about. 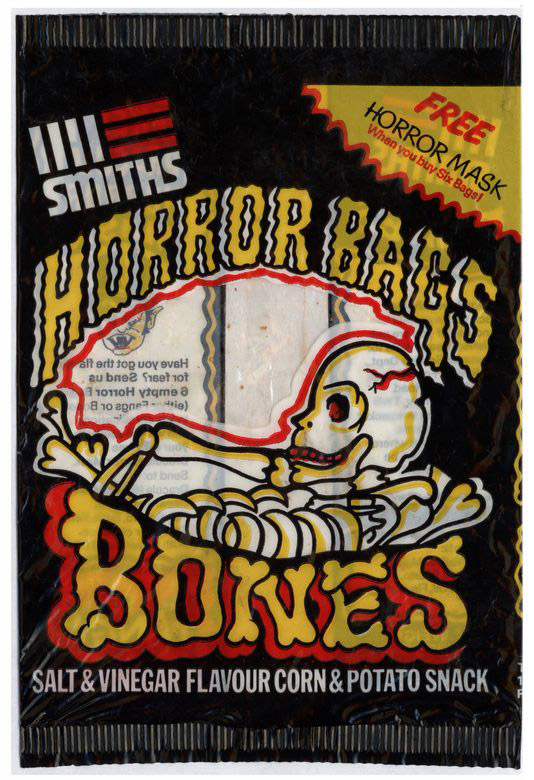 Horror Bags Bones Smiths crisps packaging, c.1974
Maraid Design: @MaraidDesign
Who remembers these as a child?! You could also get bats, fangs, claws and ribs. This type design is a charming, playful take on the shivery horror style, combined with letters made from bones, and certainly jumped out of the sweet shop shelf (they did to me anyway…!). If only they were still making these! 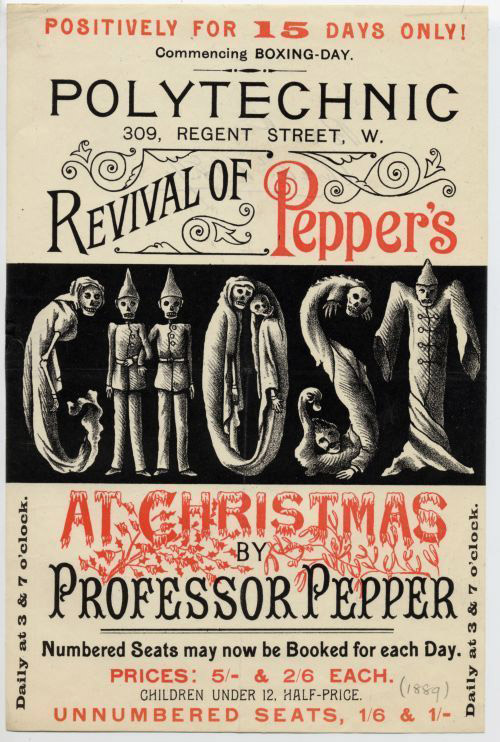 Pepper’s Ghost poster, 1889
Design Museum: @DesignMuseum (via myself @uberbabygraphic!)
I love, love, love this old poster for Pepper’s Ghost from 1889. Stunningly drawn letters made from dressed up skeletons. Only the Victorians could squeeze in so many over-the-top styles in one poster yet make it all come together so beautifully. It is so exquisite there is not much more I can say about it except that if anyone wants to obtain a copy for me, then they are most welcome!

Well, I could keep posting and posting and posting – there really were some great contributions. You can see all of the submissions together at the Design Museum’s Font Sunday Pinterest page. Let me know your favourite image, or if you have another to suggest, just leave a message in the comments section. And I want to thank everyone that took the time to take part and submit their favourite horror typography. Long live horror!