London Rhymes – the Dark Side…

I love traditional, old rhymes. And as I have a deep interest in the macabre, I especially love those with darker undertones… I also dearly love the place I was born, London, and its rich history. So what better way to marry the three and produce some letterpress prints based on some of the darker London rhymes? I actually designed and printed this set of four last year, but when looking through them recently I thought I’d share some of the meanings of them with you. They are all generally perceived to be children’s nursery rhymes, we all happily sang away at these as a child, totally in the dark as to their actual meanings…

LONDON BRIDGE IS FALLING DOWN 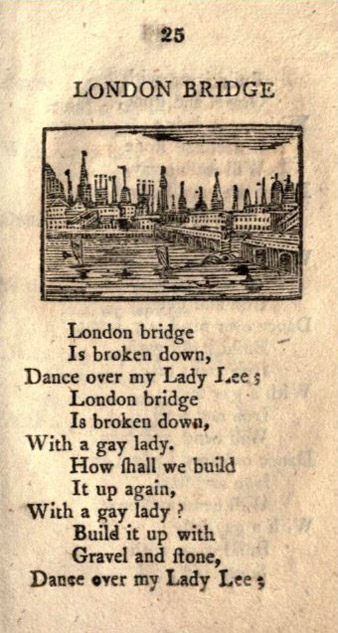 One of the most well-known English rhymes and singing songs, and certainly I find, one of the most eerie. There are actually 14 verses to it, but I chose to focus on the first.

Its earliest known text dates from the 18th Century, from Tommy Thumb’s Pretty Song Book, 1744, although versions of it were thought to exist in the 17th Century. But there have been numerous variations of the lyrics since then, ending with those with which we are familiar today.

London Bridge was first built by the Romans in AD60 but it fell into disrepair when they left, then it was rebuilt in the 12th Century. The most disturbing idea for London Bridge Is Falling Down is that of a ‘watchman’ to guard the bridge; this ‘watchman’, from pre-Christian tradition and belief, actually being the remains of a human interred in its foundations, and which would ward off evil.

The ‘Fair Lady’ has been said to be either Matilda of Scotland (c. 1080–1118), Eleanor of Provence (c. 1223–91), The River Lea (one of the Thames’ tributaries), or a member of the Leigh family who have their own family story of a human sacrifice buried under their very own Stoneleigh Park. 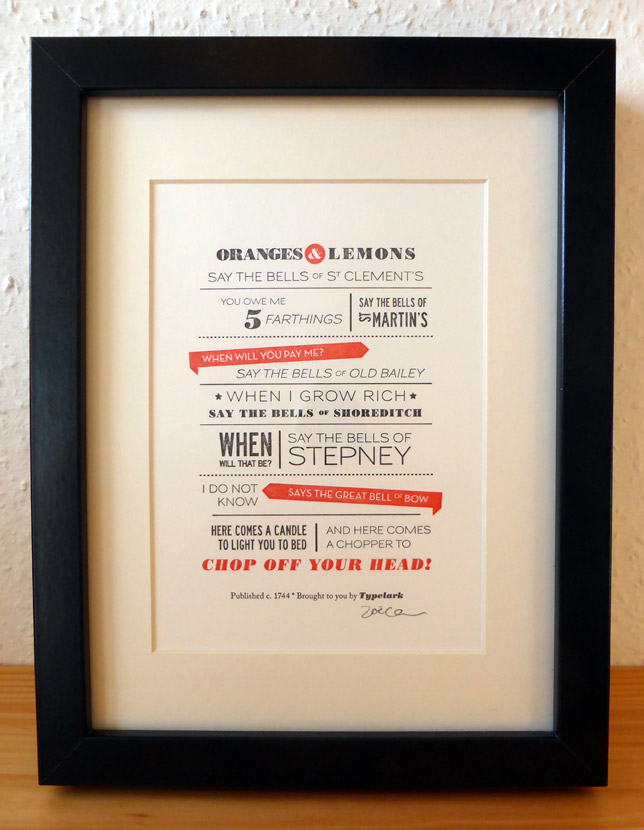 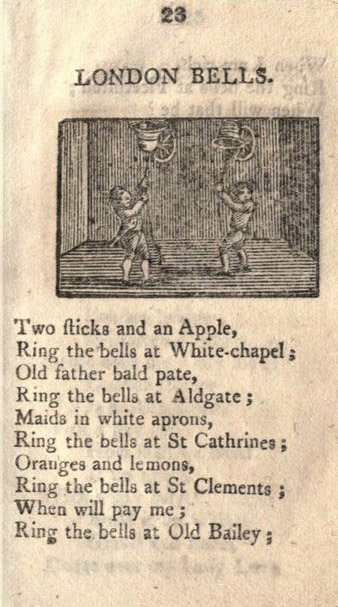 One of the most well-known rhymes and singing games, showcasing the various church-bells of the City of London. Many of us will recall as a child wondering if ours would be the head that was ‘chopped off’ after following in line, under the arches formed by the arms of our playmates, and an ensuing feeling of ill-ease.

Its first known printing was in 1744, once again in Tommy Thumb’s Pretty Song Book, although with less macabre nuances. Its dark side alludes to when condemned criminals were led along the street to their executions to the sound of these very bells; further, that each of these churches and their environs had a specific role to play on this journey. For example, ‘St Martins’, an area populated with many pawn shops, or ‘Old Bailey’, where a Bellman would ring a bell at midnight outside the cell of a man due for execution the next day.

It has also been suggested that they might allude to Henry VIII’s several wives, many of whom met a grisly end. A final line ‘Chip chop, chip chop, the last man’s dead!’ Is sometimes added to the end. 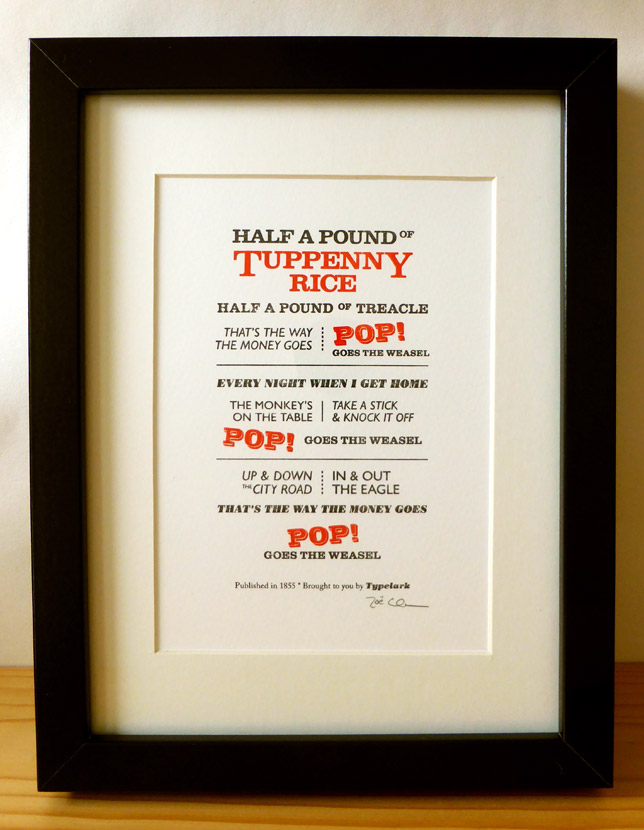 Pop! Goes The Weasel is a little later than the others, from 1855. Its origins are less clear, but one of its darker interpretations derives from the terrible conditions of the working class, poor, and immigrants in Victorian London, and particularly around the area of the City of London where ‘The Eagle’ public house is located; this is still there (though not the original one) on City Road. The area was known for its textile industry and sweatshops, and entertainment such as theatres and music halls (The Eagle was once a music hall) where the low-paid workers would relax and spend their little earnings.

Some of the meanings of the terms used? Well, a ‘weasel’ is a term used in textile spinning, and alternatively, ‘weasel and stoat’ is Cockney Rhyming Slang for coat, so ‘weasel’ being a coat. ‘Pop’ is the sound the sound of the spinner’s weasel, but also a slang word for pawn. So both terms allude to life in the sweatshops, and also having to pawn your few possessions to get a little money. A ‘monkey’ was a Victorian term that sailors called their jug of alcohol. 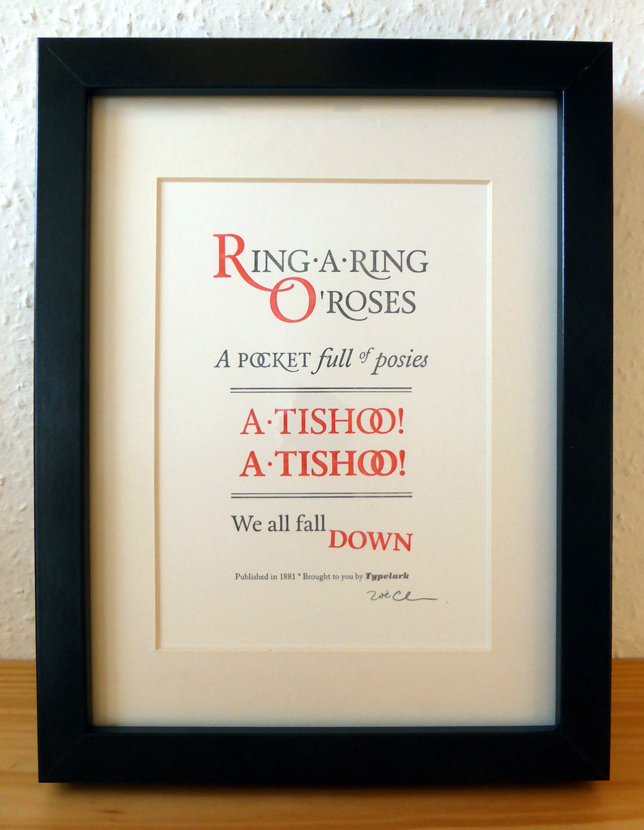 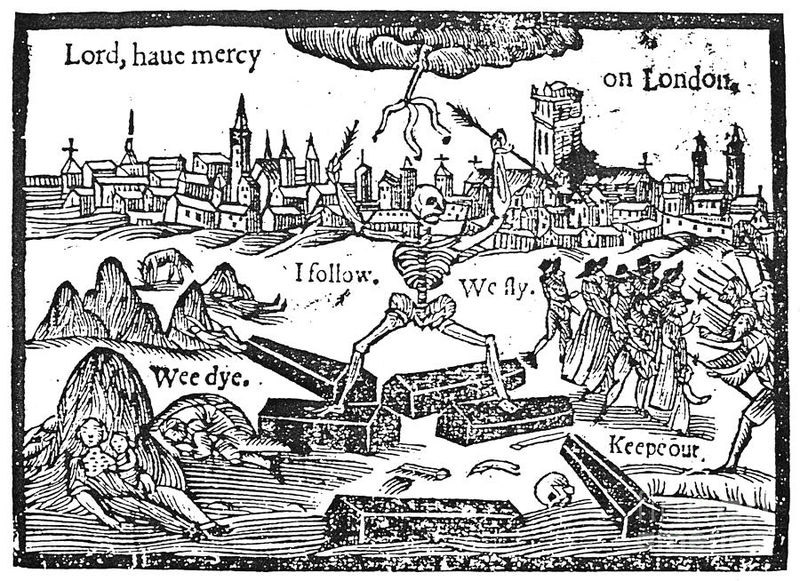 ‘Lord, have mercy on London’, 1370 woodcut about The Black Death. Source: Wikimedia Commons

Although this idea came about in the 20th Century and is largely dismissed now, one of the prevailing interpretations of Ring-A-Ring O’ Roses was that it was about both the Black Death in London, 1348, and the Great Plague of London in 1665. It is not considered a possibility now as the rhyme itself did not appear until 200 years after the latter ended. Although sung in the 18th Century, it actually first appeared in print in 1881 in Mother Goose by Kate Greenaway, minus the sneezing.

It is still nonetheless, the favoured interpretation. It certainly lends itself well to conjuring up images of plague-ridden unfortunates. The ‘Ring-A-Ring O’ Roses’ would represent the rosy rash that appeared first (though this is not an actual plague symptom at all). The ‘pocket full of posies’ might be the posies of herbs people carried to protect themselves from it. The ‘A-tishoo!’ being a clear sign someone had succumbed to it, and ‘all fall down’ being their end fate. In the US the phrase ‘Ashes, Ashes’ was used in place of ‘A-tishoo!’ and thus symbolised the cremation of the poor plagued souls.

There is much more information available on all of these rhymes and others, there is too much for me to go into detail here; but if you are interested in learning more then the following would be my first port of call: I can’t recommend highly enough any of the writings of Steve Roud, English Folk expert and creator of the Roud Folk Song Index, or one of my wonderful books The Oxford Dictionary of Nursery Rhymes by Peter and Iona Opie, again, experts in the folklorist and children’s literature field. Another good one is Pop Goes the Weasel: The Secret Meanings of Nursery Rhymes by Albert Jack.